Join my newsletter list to be the first to hear our latest recipes! Learn More

Tuscan-Style Tomato and Bread Salad with a Sweet Twist!

As the temperatures hits upper 90’s here in Texas, I make sure to prepare food that require limited time spent in the hot kitchen. This classic bread and tomato salad I’m about to share with you, is exactly that kind of food! I am talking about refreshing melon panzanella. It is a light, summery salad that can be turned hearty enough to be served as a light meal or supper. And serving salad for dinner is a great way to eat light. Believe my your tummies will thank you when you go easy on them, especially on hot summer days!

Until the twentieth century, Panzanella was an onion based salad rather than tomatoes. And it was typically made with stale saltless bread that had been soaked in water and squeezed dry. Panzanella first appeared in the 16th century, when an Italian painter named Agnolo di Cosimo – also known as Bronzino – developed a taste for onions with oil and vinegar served with toast.

Most of the traditional Florentine recipes (Florence is the capital of Tuscany region) such as ribollita or pappa al pomodoro, Panzanella included, are made with the famous Tuscan saltless bread.

But why is the Tuscan bread saltless? There are two theories behind it:

The name Panzanella is a portmanteau of “pane”, Italian for bread, and “zanella”, a deep plate in which it is served. This later transformed into a salad by the addition of purslane (a slightly sour and salty leaf vegetable popular throughout Europe) and cucumbers. For more on purslane follow this link.

This traditional salad is made using stale, dried bread that has been rehydrated in a dressing of sweet tomato juices, vinegar, and plenty of olive oil. Our recipe adds parmesan cheese for richness and cucumber for crispness. It’s a great recipe to make ahead of time. Traditionally it was recommended to use the stale bread, and let the combination of ingredients sit for a long time (up to 6 hours), to make it taste better.

There are 3 ingredients that sets our refreshing panzanella salad apart from the traditional recipe. First is the sweet, edible, and fleshy fruit from Cucurbitaceae family commonly known as, MELON. Second is the use of FRESH BREAD (baguette in this case). Third, is the BUTTER used to turn the baguettes crispy, on a pan on a slow heat. Butter not only helps turns the bread turn crispy golden brown but also gives a rich salty flavor, offsetting the sweetness of the melon and tanginess of the tomatoes.

I used fresh bread (baguette) only because I had guests coming over & thought of making an impromptu salad with the baguette. And as we know adding bread to any salad instantly makes it soggy. So I diced the baguette into bite sized chunks & tossed them with melted butter in a pan, till it turns crispy, golden brown croutons.

Generally if I have the opportunity & time, I visit the farmer’s market for vegetables and bread. While store bought works, there’s something about farmer’s market ingredients that makes it a little better.

Another tweaking I do while serving this salad is, to NOT mix the bread with the salad early on. I know it is non- traditional way of making the recipe but this is exactly what sets it apart! Trust me here!!

I mix all the ingredients except the bread and when it is time to serve, I put the bread into individual serving bowls & top it off the with salad. That way the croutons do not get too soggy & acts as a base that absorbs all the dressing while retaining it’s crispiness.

Ultimately the choice is yours – To mix the bread early on OR later! Why not try both ways and see what works for you? Let me know in the comments below! 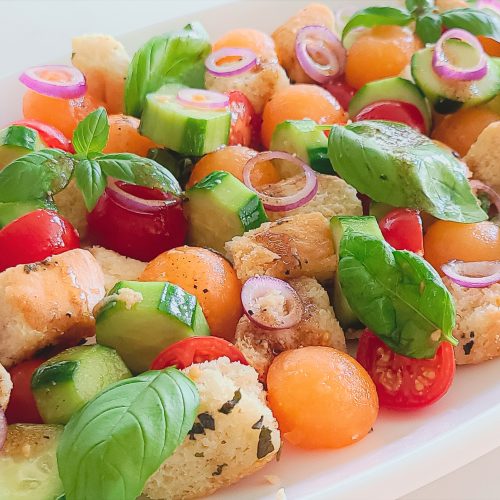 Liked this recipe? Leave a comment below, rate it! It is super helpful for us and other readers. Be sure to follow us on Facebook @RecipeForte.

Making this recipe?? Share a photo with @RecipeForte, hashtag with #recipeforte so we can share what you’re cooking!

Previous Post: « HOW TO BEAT JET LAG – 7 HACKS FOR FREQUENT FLYERS
Next Post: PROVEN FACTS: 7 TYPES OF REST THAT WILL RECHARGE YOU »

“Food is symbolic of love when words are inadequ

Spend your days with the ultimate summertime treat